Flight simulators enhance air safety significantly. These can be used to provide civilian and military pilots with practical instruction and training. Control Loading Systems are the sensitive human-machine interfaces in such simulators and have a major impact on successful training because they provide an authentic reproduction of what happens in an aircraft and a realistic simulation of failure modes. We offer our customers these systems from a single source, including all the integrated hardware and peripherals as well as the necessary software systems and programming for aircraft type-specific databases.

The Aviation Combined Arms Tactical Trainer or AVCATT is a mission training and rehearsal system used by the United States Army. It consists of six dual helicopter cockpits along with a command center and debrief area. Each cockpit can simulate either a UH 60A/L, OH58D, CH-47D, AH-64A or AH-64D helicopter, allowing the combination of multiple aircraft types during the mission. The system recognizes the different sticks and grips of each helicopter type and then automatically reconfigures itself via software to represent the aircraft. WITTENSTEIN provides electrically coupled integrated modular actuators for each primary flight control axis, as well as the associated sticks and grips for the different helicopter models.

At the DLR, our Control Loading System simulates the control system of a helicopter very realistically. 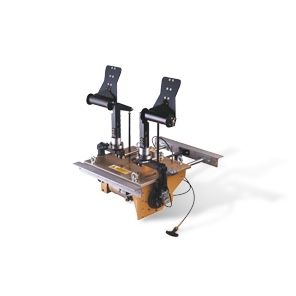